INTERVIEW WITH THE AUTHOR

What are you currently reading? I usually read several books at once. Right now I’m catching up on Kevin Hearne’s Iron Druid Chronicles (I just finished Hunted) and I just re-read Anne Calhoun’s Liberating Lacey for probably the sixth or seventh time.

Do you have a favorite author? Who is it: Absolute, hands-down, fangirling favorite? Tana French. Though I did cower in awe when I passed Nora Roberts at a conference last summer.

When did you start writing? I started writing seriously about six years ago. Before then, it was mostly half-assed story attempts and bad poetry.

Why do you write? The need for a creative outlet. Also, the voices in my head won’t stop talking.

Who is your intended audience and why should they read your book? Broken Down is for anyone who’s looking for something a little more character-driven. It’s not your typical rock star romance; Shane’s older, he’s been in the industry for a while, and he’s seen the toll it takes. And anyone who likes second chance romances!

If you could go back in time and meet one famous person or legend in history, who would it be? Why? What would you say to them? You know, I have no idea! Maybe Freddie Mercury? He had an amazing voice, and Queen has influenced so many musicians.

How did you come up with the idea for your book? Broken Down is loosely inspired by actual events; the lead singer of Sevendust lost both his brother and a friend in the same year (although not under the same circumstances I used in the book). After I read Mystery Man by Kristen Ashley, I was intrigued by the idea of a hero who kept coming to the heroine night after night, and the story just evolved from there.

Tell us about your cover art. Who designed it? Why did you go with that particular image/artwork? RaineyCloud9 is my cover artist, and she did a stellar job. She doesn’t mind me picking out my own images and sending them to her, which I love. I wanted something that conveyed a sense of loneliness. I found the image that eventually became the cover during one of my many tumbles down the rabbit hole of stock images, and she turned it into a lovely cover.

Who would you cast for the main characters if your book became a movie? I love Michelle Williams – she’s incredibly versatile, and she’s popped into my head more than once when I’ve been fantasy casting my books. She’d be my choice for Krista. As for Shane, Michael Ealy is my pick.

How about an excerpt from your book meant to capture our imagination and make us want to read more?

Hospitals were harbingers of death and bad news. It didn’t matter that Shane’s surgery was on his ankle and the farthest thing from life-threatening. It was still a hospital.
He was reclining on the bed, gaze bleary as he stared into space. The smile he gave her was goofy and lopsided. “Hey,” he slurred.
“Anesthesia not quite worn off?” The butterflies calmed somewhat at the sight of him, unharmed and awake, and she moved to the side of the bed, gripping the railing.
“Mostly. You look beautiful. Classy and business-like.” He freed one of her hands and brought it to his mouth, pressing a kiss to the palm.
The touch spread through her, blanketing the nerves. “I should. Had a client meeting before I came here. Did the surgery go okay? No complications?”
He blinked, green eyes still shadowed with sleep and pain. “Brain’s not working right. Don’t think there were any problems.”
Shoes squeaked on linoleum behind her, and she glanced back to find a white-coated doctor in the doorway. “Mr. Jones. Ready to go over you post-op info?”
Krista found a seat and scooted it closer to the bed, Shane’s grip on her hand never faltered, his thumb rubbing idly over her knuckles. Sensing he wasn’t quite awake enough to pay attention, she listened carefully to the doctor’s instructions and made a mental note about when he’d be able to start physical therapy.
The doctor handed her the instruction sheet along with a list of referrals for PT, letting them know a nurse would be in shortly with discharge paperwork.
“Guess you’ll be my prisoner a while yet. And no cooking,” she admonished, standing so she could help him from the bed. “Let me find your clothes.”
He shook his head. “C’mere.” He tugged on her hand, kept on tugging until she was bent over, a lock of hair falling free of her ponytail. “Need you,” he whispered, mouth an inch from hers.
Need. The word meant many things, depending on who it was coming from. Whenever Shane needed her, she didn’t just soften. She melted. Because need for Shane was so far from what Riley needed, what her mother had needed, it might as well have been something else altogether.
His lips were soft and seeking, like he was afraid she’d pull away. She changed the angle of her head, changed the angle of the kiss, and forgot she was standing over him in a hospital room. The world became his mouth on hers, promising everything, desire and warmth and a million tiny gestures, a thousand moments they hadn’t had yet.
They’d had heat. They’d had pure, mindless lust. But it was the quiet, banked need that snaked sticky tendrils around her heart and squeezed.

The one thing he could do for her was let her go. Until he couldn’t.

When Thieves’ guitarist Shane Jones lost his close friend to a freak accident, Krista Conner helped him through the worst of his grief. He kept their late-night trysts a secret to protect her from the tabloids, and when she broke up with him, he let her go.

But he never got over her.

Months later, his world is rocked again by the death of his brother mere weeks before the biggest Thieves album yet. Grieving and desperate for peace, he tracks Krista down, craving the salvation he found in her sweet spirit. Only this time, he’s determined not to leave.

Krista left Shane because her life was a mess. She’s rebuilt it, piece by challenging piece, making some hard decisions along the way. She’s settled into a new city and a new life, and for the first time in a long time, she’s content and happy. Then Shane turns up, promising to stay, promising to care. Promising everything.

Shane’s the one she wants, but the toughest choice she made could drive him away for good. 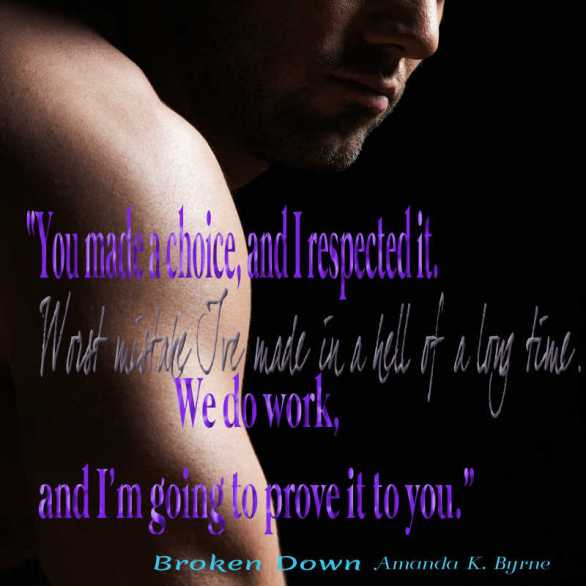 I’ve received a copy of this book in exchange for an honest review.

First off, I’d like to say I don’t like reading spoilers so I don’t write them. Also, I don’t see the point in repeating the book’s blurb as it doesn’t add much information to the readers.

It’s been a while since a story had tugged at my heartstrings the way Broken Down did. I must confess at times it felt more like it was ripping my heart out of my chest actually. But I know it was mainly due to the fact the story dealt with issues that are very close to home. Having a nephew struggling with his drug addiction for the longest time, in and out of rehab, and seeing my brother’s family affected by it has given me very personal knowledge of the problems Shane and Krista face. Hats off at Amanda’s portrayal of those issues, by the way. She kept them real. Painfully so. It isn’t an easy topic to write about and she did it extremely well and balancing the emotions so that it was never too depressing. Again, a very thin line to walk and the author managed it brilliantly.

But don’t get me wrong, the story, as Amanda mentions in her interview above, is about second chances, not drug addiction. Also as she describes it, Broken Down is a character-driven story. Another reason for me to admire her writing abilities since she did a great job fleshing out both the main characters and the supporting ones. She manages to get you inside Krista’s and Shane’s head, which I’ve always preferred to the one-sided POV, thus allowing you to have a more complete picture of their reasons, feelings, doubts, and struggles. Plus, the way she mingles their present-time story with droplets of their past together helps the reader gradually understand their personalities and relationship better. I particularly like the fact Shane isn’t a typical rocker and Krista isn’t a typical damsel in distress. On the contrary. She’s the strong one giving him the stability he craves. Again, on a very personal note, I relate to Krista’s inability to seek help or accept it from others so maybe that’s another reason the book moved me so much. For people like Krista and I, it’s simply NOT easy to ask for help. And Amanda painted a spot-on picture of it. As for the supporting characters, they aren’t there only for show. They all have interesting stories of their own to share with the reader. What else can you ask for in a book right?

Finally, don’t get put off by the “Book 2” idea thinking you won’t get it unless you read the first book because this is a totally stand-alone story. However, after reading Broken Down, I’m dying to download Hidden Scars and start reading Taylor and Sara’s story. LOL 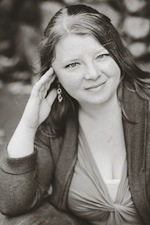 When she’s not plotting ways to sneak her latest shoe purchase past her partner, Amanda writes sexy, snarky romance and urban fantasy. She likes her heroines smart and unafraid to make mistakes, and her heroes strong enough to take them on.

If she’s not writing, she’s reading, drinking hot chocolate, and trying not to destroy her house with her newest DIY project. She lives in the beautiful Pacific Northwest, and no, it really doesn’t rain that much.

2 thoughts on “Broken Down Blog Tour”