Find the tour DATES clicking the BANNER above or HERE.

Please help WELCOME guest author Donna Del Oro today. She put together this post so that readers could know her main character a bit better. Don’t yoy love it when authors do that? I DO!!

ATHENA’S SECRETS: Athena and Her Art

The heart of this novel concerns a young woman, Athena Butler—a modern-day descendant of an ancient bloodline of psychic females—who is first overcome by her clairvoyance at age nine. Her gift/curse has caused her problems during her childhood and teenage years. But by age twenty, she has learned to control her “sixth sight” and is able to turn it on and off like a faucet. If she is in a social situation and doesn’t want to be distracted by the additional input of another’s thoughts and emotions, she has learned to close the channel into other people’s minds.

But there’s another element to Athena’s personality and character. She has an artistic gift that’s nearly as strong as her clairvoyance. As a talented art student, she loves figure painting and specializes in portrait painting. Throughout the novel, Athena places as much importance on her artistic abilities as she does her psychic abilities. As her diplomat father tells her, her artistic talents are a much more marketable skill. Consequently, she is recruited by a gallery owner to join a group of pastiche painters—Genuine Pastiches of the World’s Greatest Painters–who paint replicas of famous paintings and sell them as legal, authentic copies. The world might call these replicas or copies fakes but an elite class of art collectors, who cannot afford to pay three-hundred million for an original Cezanne or Monet, are willing to pay fifty- to sixty-thousand for a genuine pastiche of that same painting. When she is accepted by the gallery into this special class of painters, her money worries end and she’s able to pay for her last year of art school and become a self-sustaining artist.

For me, as a student of ESP phenomena, depicting Athena’s psychic gifts was fun! As a former art minor in college, sharing my knowledge of painting and art history has been just as enjoyable. Actually, I’ve had to learn more about various techniques and styles through the centuries and have had to refresh my art history knowledge. For a perpetual student like myself, this challenge has been a wonderful addition to my research! I’ve even gone back to painting as a hobby because of my fictitious character, Athena Butler—so thank you, Athena!

* I received a review copy of this book in exchange for an honest review. *

I’m a huge fan of everything paranormal but as such I’m also very hard to please. For instance, don’t try to convince me vampires can walk in the sun (and sparkle) because you will waste your time and breath. Having said that, I approached this book with extreme caution as I nowadays do when there are paranormal elements in the story. But my fears were unfounded. Donna Del Oro did her research so the ESP elements in ‘Athena’s Secrets’ are well-founded. Moreover, plot is well-developed and the characters are both believable and likeable.

I’m against giving (or reading) spoilers so I won’t talk about the ending except to remind other readers this is book 1 in a series of books. By the way, I’m looking forward to ‘Athena’s Quest’ the second book in this series.

Athena Butler, the twenty-year-old descendant of an ancient bloodline of psychics, yearns to lead a normal life. She wants a career, a boyfriend, independence. Her clairvoyant gift, however, has taught her people can be false and dangerous. Although warned to keep her powers a secret, she’s recruited by law enforcement to help search for a serial killer and to uncover a terrorist cell.

She bonds with an intriguing, handsome man, Kas Skoros, who knows her secret and accepts it. Of the same bloodline, his mother is precognitive and predicts they are meant to be together…some day. Kas, a military veteran and Search and Rescue deputy, is skeptical and cynical. Life is too uncertain. Yet, he can’t resist exploring his passion for Athena.

Still, they face obstacles beyond their control. Can Kas overcome the obstacles? And will Athena stay alive long enough to fulfill her dream of a normal life?

Print copy of Athena’s Secrets (US Only)

Kas pointed at one of these gravel paths that led through a thicket of oak trees. He seemed to observe how Spartacus was glued to Athena’s side, his tongue flopping out happily, and his tail wagging excitedly.

Kas led her down the back terrace steps to the gravel path behind a row of shrubs surrounding the pool and patio. They’d have to cross twenty acres—about a half-mile, Kas said—to the family’s boat dock.

Kas gazed at her with a speculative look. “Women like Alex. He’s the family charmer. Guess he stole your heart, too.”

“He usually takes a long time to warm up to people.”

Athena scratched under the German shepherd’s long jaw. “Like his master, I suppose. We became friends yesterday during the ski boat ride. Spartacus told me a lot about you and how he feels about you. You’re his sun and moon, his alpha and omega. He showed me all the things you do together.”

Kas halted on the path. “You read my dog’s mind?”

She didn’t mean for her tone to be so defensive, but out it came. “Well, yeah. It’s what I do. I was holding him in the boat. He doesn’t think in words, of course, but the visual imagery and feelings were there.”

He shot her a crooked smile, then slapped a palm against his thigh, a signal for Spartacus to heel at his side. The dog looked over at his master, back at Athena, gave a whine, and reluctantly moved away from her.

He mock-growled at his dog, which caused Spartacus to perk up his ears. Something was going on with these two-legged humans but the dog didn’t know what.

“That’s for being a traitor, boy. Telling this girl our secrets.”

Athena grinned. “Don’t worry, he didn’t reveal secrets about any of your girlfriends. I don’t think Spartacus knows or cares about that.”

“C’mon, boy.” Kas beckoned as Spartacus rubbed his fur against his master’s leg.

“You’re something else, Athena,” he added, “You’re here three days, and already stealing my dog. But you don’t want Alex? Most women I see hate my dog but crush on Alex. You’re a strange one.”

She almost tripped. Somehow his words both pleased and stung her. “Strange, huh? Well, I don’t think I want to be friends with you after all.”

He snorted but kept on walking, leading her down the path. “No danger of that happening. I don’t make friends with tall, pretty blondes, especially if they have ESP.”

He thinks I’m pretty.  That thought unsettled her more than she wanted to admit.

“Because of your mother’s precog dream? She saw you ending up with a tall blonde?”

“Maybe. She said the tall blonde would have the gifts of the ancient Greek priestesses. That kind of narrows it down, doesn’t it? But hell, no one tells me what my future’s going to be, not even my own mother.” He stopped and fixed his gaze on her face. “Anyway, by strange I meant unique, special. What you, your mother, my mother have—this bloodline of females is extraordinary. You need to be protected.” He looked away and continued walking. “Alex and I do what we can for Mom. We guard her secret. We don’t let the outside world exploit her. Your mother has her husband. I suppose you’ll have to find a protector, too.” Kas looked down at Spartacus, who was trotting alongside. Athena heard his implied message: Don’t expect me to be him.

“Yes,” she said, her chin up, “perhaps. Right now I can protect myself.” 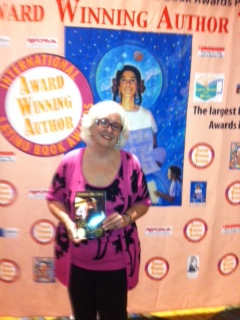 Donna Del Oro lives in Northern California with her husband and three cats. She taught high school and community college English classes for 30+ years and is now happily retired. When not writing novels or reading voraciously, she travels and sings with the medal winning Sacramento Valley Chorus.

Donna is a member of Capitol Crimes, the Sacramento chapter of Sisters in Crime in addition to the Valleyrose chapter of the RWA. She has judged RITA entries and does developmental editing on the side. Two of her novels, Operation Familia and Born To Sing, have won national and international awards.

Follow clairvoyant artist Athena Butler in the next book in The Delphi Bloodline series: ATHENA’S QUEST.